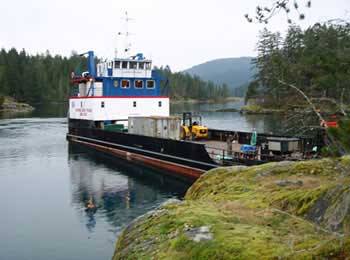 Delivering a 50-ton bulldozer to a lumber camp in northern British Columbia was the best vacation trip Mary Stiles ever took.

No roads lead to the lumber camp, so the bulldozer was delivered by landing craft similar to those that delivered young GIs to the beaches of Normandy and Marines to Iwo Jima. But this landing craft, the Aurora Explorer, has all the comforts of home, plus gourmet meals.

Some of the meals Stiles enjoyed on her vacation were the ones she pulled out of Knight Inlet with her fishing pole 30 minutes before sitting down to eat.

Stiles, a retired Michigan lawyer, and the other 11 passengers aboard the Aurora Explorer had no idea where they were going when they booked their passage a year ago. Captain Ron Stevenson didn't know either.

He pilots his landing craft deep into the British Columbia wilderness based on what construction equipment and other supplies he is hired to deliver to isolated outposts. If you want to come along as a paying passenger, you're welcome to join him.

The Aurora Explorer gets to roam through some of the world's most beautiful scenery. The flat-bottom vessel is only 135 feet long and can venture into shallow waters and narrow fjords where most passenger vessels can't navigate.

That's why this working boat is fully booked for this year. Although the Aurora Explorer patrols British Columbia's rugged coast all year long, tackling winter's biting winds and the occasional blizzard, passengers are carried only between March and October, said Guy Adams, owner of Marine Link Tours.

"Most of our passengers are retired people who have traveled extensively and have taken many sea cruises, but they no longer want the swimming pools and the casinos when they cruise," Adams said. "They want to see and experience things that few other people have done.

"They certainly get that on the Aurora Explorer. We go into all kinds of hidden little communities and working camps along the B.C. coast that can only be reached by boat or seaplane.

"Our first priority is to deliver construction equipment and building materials," plus plenty of other supplies (such as draft horses, seeds for replanting forests, bags of fish food for fish farms, cases of beer and booze for wilderness resorts, groceries -- everything a small town needs).

Passengers get off at many delivery spots to explore the neighborhoods, and the vessel also makes unscheduled stops at isolated beaches known to very few people. "We pull up, drop the ramp, and our passengers go hiking on a trail through the rain forest," Adams said.

"We send some experienced crew members with them and encourage them to make lots of noise. They are walking through one of the most populated areas on Earth for grizzly bears.

"It's a lot more fun to see grizzlies from the boat than it is to meet one in the woods," Adams said.

And they often spot bears, both grizzly and black bears, when cruising up the magnificent Knight Inlet, an 80-mile-long fjord. The towering Coast Range Mountains soar up from the water's edge. Waterfalls plunge 800 feet down the sheer cliff walls. The Great Bear Rainforest stretches from Knight Inlet, midway up the British Columbian coast, to Alaska. It is the largest tract of contiguous ancient temperate rain forest left on Earth.

For Betty Brown, the ship's cook, it can be frustrating to serve her gourmet meals while cruising in this spectacular fjord. They are delicious but often disrupted by an announcement from the wheelhouse: "Bear off the port bow" or "Orcas dead ahead."

Passengers are welcome up in the wheelhouse at all times. Try that on a cruise ship with 4,500 passengers.

They sleep in six functional staterooms, three with forward-facing windows (so passengers can watch the crew unload a bulldozer at 2 a.m. from their island awash in floodlights into the pitch blackness of the still forest).

"Keep in mind this is a working boat. But our passengers tend to be adventurous people who are looking for something different and are happy to go with the flow." No pets, no smoking, no kids.

Three of the staterooms have bunk beds, and three have twin beds. The passengers share four washrooms and two shower rooms, separate from the six crew members.

You eat with the captain and his crew. Meals are served in the library, which has an excellent selection of books about the British Columbian coast -- not that you have to read about it. You'll be living it on one of the most unusual cruises there is.

Posted in In the Media
← The Aurora Explorer By Laurie CarterFancy a magical mystery tour? →