By Air Expand
By Car Expand 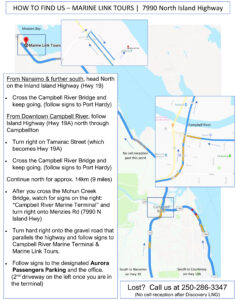 Follow Island Highway (Hwy 19A) north through Campbellton
• Turn right on Tamarac Street (which becomes Hwy 19A)
• Cross the Campbell River Bridge and keep going. (follow signs to Port Hardy) Continue north for approx. 14km (9 miles)
• After you cross the Mohun Creek Bridge, watch for signs on the right: “Campbell River Marine Terminal” and turn right onto Menzies Rd (7990 N Island Hwy)
• Turn hard right onto the gravel road that parallels the highway and follow signs to Campbell River Marine Terminal & Marine Link Tours.
• Follow signs to the designated Aurora Passengers Parking and the office. (2nd left once you are in the terminal)

By Ferry Expand
What will the weather be like during the different seasons and what is the best time to go?
Will we have opportunities to disembark?

As our itinerary is determined by the freight delivery and tidal schedule, shore excursions are not guaranteed.  Our Crew will do their best to get you onshore to stretch your legs as much as possible.  Stops usually range from 30 minutes to 2 hours. Please consider your physical abilities and medical history when determining whether some of the walks are appropriate.  Speak with your Crew if you are unsure.

What do passengers do all day?

If you are looking for casinos and dancing girls, a freighter is not the place for you – but for most people, that is the whole point! The Aurora Explorer is a working ship and passengers enjoy watching the delivery of freight and goods to camps, fish farms, logging camps, lodges, and remote sites along the coast. Passengers like to spend their time relaxing, reading books, playing cards or simply sitting on deck watching the ocean go by.

When is wildlife viewing at it’s best?

In the spring, April, May and June, there are many birds returning from their winter migration as well as black bears foraging on and near the beaches. This is a good opportunity to see whales and porpoises as they follow the herring spawn up the mainland inlets.

July and August is when the salmon are abundant in the local waters before heading up their native rivers. Orcas frequently are seen as they hunt for salmon during these months.

In the fall, September, October, and November, the salmon have returned to the rivers. The river mouths of the mainland inlets and estuaries congregate numerous species to feed on the live and decaying salmon. Grizzly bears rule this domain, but thousands of eagles, gulls, black bear, wolf, and cougar also take this opportunity to feed before winter.

What type of clothing and footwear should we bring?

The M.V. Aurora Explorer is a working freight vessel and the atmosphere on board is casual so “layering” your clothing is ideal for our coastal climate. No need to dress formally for dinner. Jeans or khakis, shorts, t-shirts, sweaters or fleece jackets are the most common form of dress. We recommend a warm jacket as even during the summer months breezes can be cool.  It’s a good idea to bring wet weather gear for recreation stops, particularly in the spring and fall. Gumboots / wellies are not necessary as they do not provide as much grip on slippery rocks as hiking boots or good running shoes. For indoors we recommend soft-soled shoes or perhaps a pair of slippers.  As washrooms are located outside of your stateroom, please ensure you have appropriate apparel for nighttime visits.  Robes are available upon request. Please attempt to bring a minimum amount of luggage as storage is limited.

What is included in the fare?

We try to make your trip as all-inclusive as possible.  Breakfast, lunch and a three course dinner will be served. There are homemade cookies, pastries and fresh fruit available in the Dinning Lounge throughout the day for snacking on. A full range of teas, coffee, soft drinks, juices and snacks are provided and available 24 hours as well. Dinner will be served on the day of departure and breakfast and lunch are served on your final day of sailing.

A variety of BC Wines are served with the evening meal as well as a small selection of beer and cider served for “happy hour” and available at dinner as well.  You are welcome to bring additional spirits and or any specific beverages as there is no bar service available on board. There is a shared mini fridge in the Accommodation Level available for your use.

A small assortment of keepsake apparel is available for purchase on board.  Your fare does not include tips for the crew.

What services will I find in my Stateroom?

Yes and no.  The Aurora does have free wireless internet; however, it is based upon the cellular reception available.  It is intermittent at best and fully dependent on your location.  When in the larger channels and straits, service is fairly decent and when further up some of the remote inlets, service is non-existent. The Aurora does have a satellite phone that works in all locations and we are able to stay in touch if necessary or for emergency purposes.

Is there somewhere safe to leave our car?

There is designated parking at Campbell River Marine Terminal for Aurora's Guests.  Please follow signage and park in one of those assigned spots. Our parking area is secure and the Terminal has a 24 hour Watchman on site. Parking is provided at no additional charge. We may be able to accommodate RVs or electric vehicles, please call ahead so that we can be prepared for you.

Is smoking allowed onboard?

The entire interior of the vessel is non-smoking. A designated smoking area is located outside on the dining level.  Please check with your Crew to confirm where you can smoke.

Do we need to bring our own towels etc?

Towels and linen are provided in your stateroom and fresh ones are available upon request.

Can we fish onboard the Aurora?

We cannot guarantee fishing on each trip.  Please let your Crew know that you are interested in fishing and they will do their best to find a spot and time to fish; however, this will all be dependent upon freight deliveries and tides. Fishing can only take place when the Aurora is stationary so trolling is not an option. All passengers interested in fishing should have their own provincially issued fishing license. We do have fishing gear on board; however, you are welcome to bring your own rod and reel if you are so inclined. If you have any more questions, please go online to http://www.dfo-mpo.gc.ca/.

How are gratuities handled?

Tipping is appreciated as an expression of satisfaction with the Crew that has taken care of you during your travels. Recognizing excellent service is a personal choice. Guests that choose to show their appreciation through a gratuity may want to consider preparing for this before arrival. If you feel your Crew have provided you with excellent service, a remarkable experience or individual assistance, gratuities are welcomed at the end of the trip.  There is a gratuities box located on the Accommodation Level.  Ideally any tips are provided in cash (CAN or USD) as they are shared amongst all Crew with the hospitality Crew receiving a larger share.